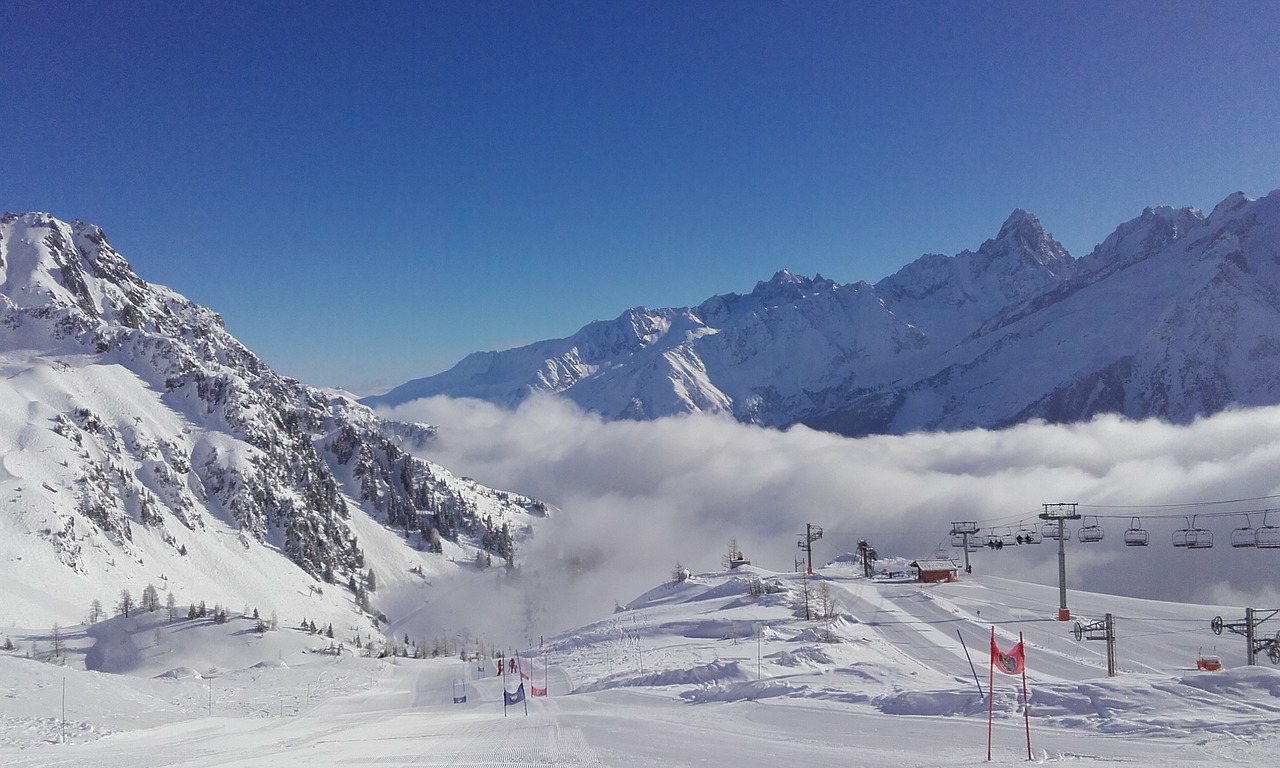 Chamonix (more formally Chamonix-Mont-Blanc) is one of the oldest ski resorts in France and was host to the first Winter Olympics in 1924. It retains the whiff of the old school about it.

This is not a homogenised French ski resort with acre upon acre of door to slope skiing on hand, all linked by an intricate cobweb of lifts. Here, as far as skiing goes, it is quality that counts over quantity; and to some extent over convenience.

The scenery is impressive, the peaks high, the valleys deep, the slopes steep and often a (free) bus ride away.

Chamonix sits (at 1,035 metres) at the base of Mont Blanc, the highest mountain in the Alps, and within cable car reach of a number of peaks.

Beside Chamonix town itself, villages strung along the valley with direct access to parts of the Chamonix ski area include Les Houches, Argentiere, and Le Tour.

In all, the five ski areas offer just over 150 kilometres of prepared pistes (69 in total), plus plenty of off piste options, accessed by 49 lifts of various sorts.

The skiing is good and varied, including the availability of glacier skiing. Although beginners are catered for, the emphasis is on testing skiing and boarding.

Les Houches (just over 1,000 metres up) is the first village in the Chamonix valley when arriving along the road from Geneva. There is a cable car from the centre of Les Houches up to Bellevue (1,800 metres) and from nearby Les Chavants up to Prarion (1,900 metres).

There are ski runs of all colours here, many through the trees. Beginners and intermediates are well catered for, while the Kandahar (black run) is a regular on the World Cup downhill circuit. However there are a good number of drag lifts, so the Les Houches area is not the most board friendly.

There are no mountain links between Chamonix and Les Houches, which markets itself as a separate ski resort. This means lift passes are not integrated although the Bellevue and Prarion lifts are on the Chamonix free bus route.

Chamonix itself is further along the valley.

Immediately above the town is the Le Brevent ski area. It takes two lifts to reach the top ? just over 2,500 metres up. Once there, skiers are committed to one of the tough black routes back to the middle station (Plan Praz ? at 2,000 metres). There is a green run here and the option to make your way up again to Aiguille de Charlanon (another 2,500 metre plus peak). This gives access to both red and black runs at the bottom of which is the cable car link to the Flegere?ski area.

There are three black runs, seven red, two blue, and two green pistes.
A?long black run?goes back down to the village.
The jewel in Chamonix?s crown is the off piste Valley Blanche run.

This is on the other side of the valley from Le Brevent and Flegere and can be accessed directly from the town using the Aiguille du Midi cable car ? a 20 minute ride that takes skiers up to just over 3,800 metres.

The ski down, all 20 kilometres of it, starts with a walk through an ice tunnel and along a fearsome ridge. The run itself is suitable for skiers competent to tackle red runs and above, although the resort recommends use of a guide, not least to make sure of avoiding crevasses on the glacier. A certain degree of physical fitness is required since most skiers take between four and six hours to reach the bottom using the ?voie normal? route. There are three other more testing possibilities.

In good snow conditions you can ski all the way back to Chamonix?s town centre although it is possible to bale out at the end of the Mer de Glace from where the Montenvers Station and a funicular ride home are near at hand.

Les Grands Montets ski area is accessed from the village of Argentiere (1,250 metres), which is yet further along the valley. There are two main lifts ? a cable car up to the 3,275 metre high Grand Montets station, and a gondola up to Plan Jordan. The first gives access to black runs leading into reds all the way back down. The second terminates in a blue run area with the possibility of working over to a second gondola which rises up to the 2,765 metre high Bochard ? from where there are red and black options.

Les Grand Montets is a large and popular ski area where snow conditions are usually good.

Travelling further up the valley, the final ski area is that of Le Tour/Balme, accessible from the villages of Le Tour and Vallorcine ? a train ride away from Chamonix town.
Balme is especially good for beginners and intermediates. From Tete de Balme (2,250 metres up) and Les Autannes (2,200 metres) there are blue and red runs.

As in the rest of the Chamonix valley there are plenty of off-piste options, with those in the Le Tour area being especially popular with boarders.
There are various snow parks in the five ski areas.
The Grands Montets Summit Snowpark caters for all levels and includes kickers, table-tops, a step-up, rails, rollers and banked turns.
The Brevent &?Flegere snowparks rely more on natural features but include a kicker with a Big Airbag to land on.
The new snowpark at Le Tour, in the Blame area, is one of the largest in Europe. It includes an eight jump blue piste, a six jump red piste, and four jump black piste.
The Bellevue Snowpark at Les Houches has areas for beginners and for expert freestylers.
The Route National 205 ? the Route Blanche ? passes along the Chamonix valley and links it to the French motorway system, making Geneva (82 kilometres), Annecy (100 kilometres), Albertville (62 kilometres) and Lyon (223 kilometres) all accessible.

Although Chamonix is in France and Geneva in Switzerland, independent air travellers will usually find Geneva the most convenient airport to use when travelling to the Chamonix valley. It is possible to make the transfer by road (about one hour) or rail, although the latter will require at least two changes.

Geneva can also be reached by train from the UK using Eurostar, the journey from London taking just over six hours ? seven hours if travelling via Paris rather than Lille.
Frances A40 motorway